We've been hearing that the Friday night Concerts in the Park have started up for the season and it was such a lovely day out we ventured downtown to see what was going on. I understand that most often the concerts are moved to the Civic Center due to rain. It wasn't raining tonight and there seemed like a pretty large crowd of folks. There were three groups which was a pretty interesting grouping of acts: The Pride Woman's Chorus, Tlingit Gospel Choir, and the Juneau Highland Bagpipe and Dance group.

Our friend Susan used to be in this chorus and has written some pieces for them so we were hoping they might sing one of her songs but they didn't. 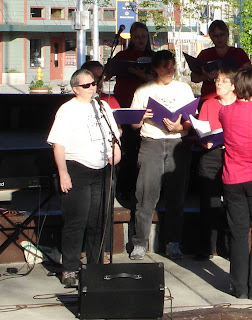 This lady sang a solo - she and her partner are moving out of state so this was the last time she would be singing with the chorus. 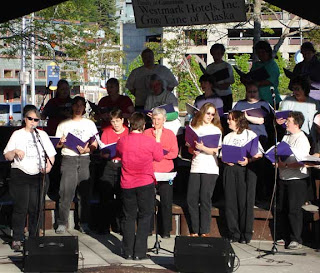 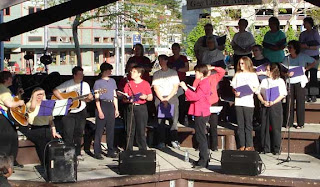 I didn't get any pictures of the Gospel Choir - turned out that they just started singing together a couple of weeks ago. It was nice to hear them sing in their language though!

And the bagpipe group - actually started their processing down the pier and marched by the cruise ship into the park and gazebo area - quite impressive. They played several songs and had 10 or 12 girls performing several dances–even one with knives. 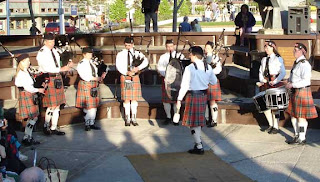 Of course not all of the crowd was appreciative of the music. I think he was one of the bagpipers kids… 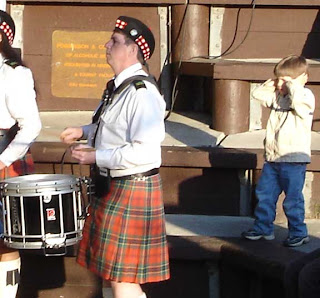