There's this little steamboat that looks like the African Queen that chugs by the house several times a day going from the cruise ship dock down the Gasteau Channel down towards the old mining site of Treadwell. She's called the Laurie Ellen and she's a cute little boat that runs by steam produced by burning wood. Yesterday as I walked down the stairs from my loft I caught a glimpse of the little boat running very close to the house. I was thinking that it was a good thing that the tide was high! 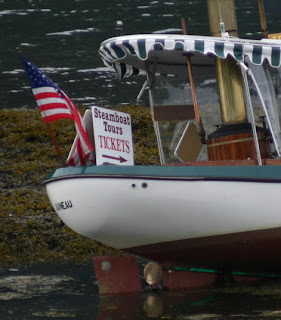 At one point a jet boat was trying to pull the boat free - little did they know that they were actually getting pulled up higher aground - if they would have drug the steamboat backwards they could have been free. I also saw the coast guard for a few minutes. I think they communicated with the captain and then they took off - leaving a pretty big wake. 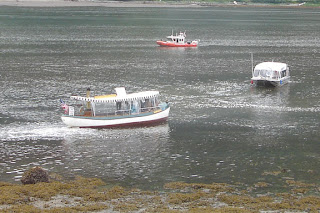 As the tide went out the boat was left high and dry. We saw the passengers putting on their life jackets. We knew that the tide was going to continue to go down and in a matter of minutes the people could walk all through some muck up over the bank and catch the bus back to town if they wanted to. They were caught up on gravel, crushed shells, and other debris so it would have been a relatively easy walk. We often walk along here looking for interesting shells and glass balls (which we never see). 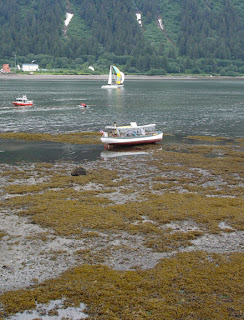 Pretty soon the coast guard came back with a rubber boat and they began taking passengers off - women and children first! The tide was continuing to recede and the little rubber boat was dragging and getting high centered. One of the coasties waded up to his knees to push the dingy off. They could only carry a couple of passengers at a time of the larger vessel so they had to make a couple of trips. 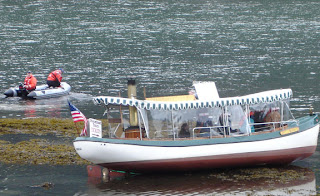 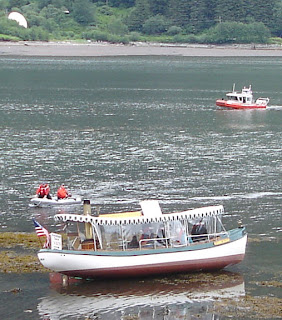 Everyone got off safely and got wisked back to the cruise ship dock. The captain and mate are waiting with the boat until the tide comes back up (about 8 pm) and they should be able to float off. I walked out and asked if they needed anything. I know they have a cell phone so they could have a pizza delivered. Maybe I'll take them a ham sandwich.
Posted by Heidi Olson at 7:37 PM