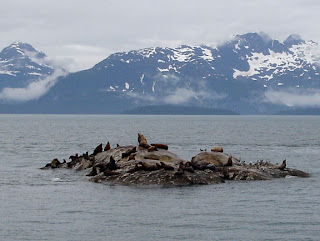 Tim and I finally made it over to Gustavus and Glacier Bay National Park last weekend. It was a place that I've been wanting to visit since I first started working for Westours and Grayline of Alaska in 1981 and has been a destination we've wanted to see since getting to know Susan and Lillian in Fairbanks. They have a cabin there and invited us over for a stay many times and we finally took them up on it.

So we picked a weekend and had an incredible time! We took the Glacier Bay and Lodge catamaran over on Friday night. It was a 3-hour trip and not very crowded so we had great seats and a quick and smooth ride. We've taken the ferry many time along part of the same route so that part wasn't new and Tim has traveled through the area a couple of times by plane, boat, and helicopter, but most of the water was new to me. We left Auke Bay Harbor at about 7 pm and got into Bartlett Cover at about 10:30. It was just getting dark and you could see the few lights of Gustavus as we traveled by. Bartlett Cove is around the corner from Gustavus. We decided to stay the night at the lodge and go into the park the next day. We made our way to the Lodge along a lighted pathway, where we spent a few hours before getting up early on Saturday for a full day's boat ride into the National Park.

Since we had plenty of time while getting to Bartlett Cove we scoped out good seats for the next morning! It was supposed to be an 8-hour day so we wanted to be comfortable.

Right away we saw humpback whales off in the distance. The area is a breeding ground and one of the most famous spots to see humpbacks. The water spouts we saw were pretty far away for us but the other tourists were pretty excited. 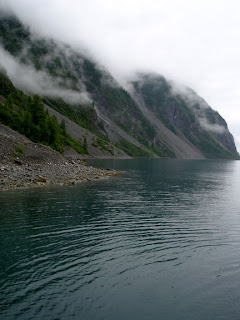 We didn't expect the weather to be that great - the forecast was for clouds and rain so we were prepared with our rain gear. The day started out a little cloudy but as the day went along the clouds lightened up and it was pretty warm out. We stayed out on the boat deck a lot anyway. 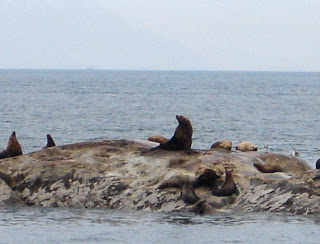 We slowed down at South Marble Island to see a sea lion and bird rookery. We saw a bunch of huge sea lions lounging around on the rocks. We also saw Tufted Puffins, Pelagic Cormorants, Pigeon Guillemots, various Gulls, Common Murre, White-wing Scoter, Oyster Catcher, Arctic Terns, and Eagles. Before we left the dock we saw junkos, crows, and barn swallows. 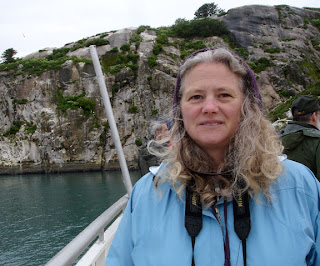 One thing the ferry does is drop off and pickup campers who are out kayaking. Glacier Bay is immense and by using the ferry to help get you around between points you can see a lot more. There was a group of about 15 kids going out for a kayak-camping trip. All their gear and kayaks were loaded on the boat with us. 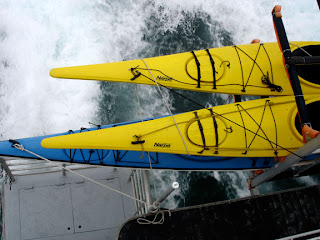 We stopped at two different places to check on the kayakers. One group wasn't supposed to be picked up until the next day but had to call the trip short when one of their kayaks and a tent was destroyed by a bear. When we were picking up the group we did see a grizzly bear just a short distance along the shore - I don't know if that was the bear or not. He didn't look very good actually, it was very thin and his fur was all scruffy. He didn't look very healthy. We did see several other bears during the day who looked much healthier. We also saw sea otters and Mountain goats. 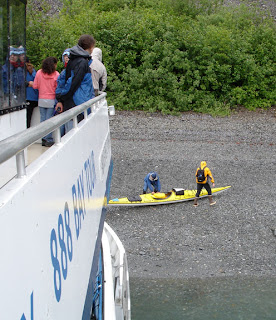 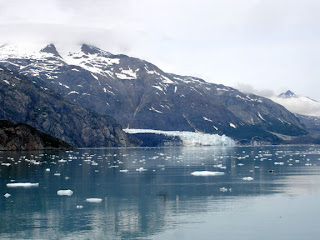 Tim at Margerie Glacier - we did see a few small chunks falling off and making a big splash - but nothing very national geographic. 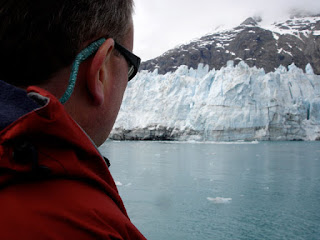 It was a long day and very much worth it. I would say that the best way to really appreciate the area would be with a kayak. The NP is very large and getting off by yourself to explore would be a good way to go. And I have to say that if time and money are a factor - Tracy Arm and Sawyer Glacier is more spectacular as far as scenery and glacier viewing.
Posted by Heidi Olson at 8:55 PM