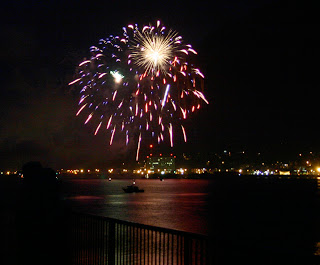 WOW - it wasn't a coincidence - Juneau really puts on a party for the fourth of July. In fact, a lot of people start right after work on the 3rd. We started to see people gathering with their trucks, campers, motorhomes, tents, awnings and bbqs at about 5 on the 3rd and the fireworks started about 8:30p and went pretty much all night! The official fireworks show started at 11:59 and went for a good 30 minutes. Since it does get dark here at that time of night you get a good show. And although it wasn't hot last night it wasn't -30 below or colder like New Year's in Fairbanks. 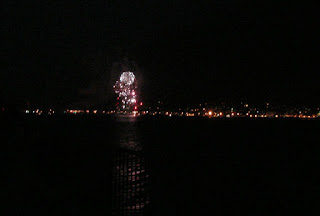 J and Krista from Fairbanks were in town and they came over to the house to see the show and brought along J's sister Pat and Clayton. We enjoyed wine and snacks before starting on the key lime pie and champagne. One thing that is really noticeable at our place is the echo you hear within the channel from setting off the fireworks. I can see why they don't do anything for New Years as it could cause a lot of avalanches. At times the sound was deafening. I'm sure that those who were on the barge setting off the fireworks were wearing ear protection.

It was a fun show - I encourage anyone who hasn't been to Juneau to plan a trip here next 4th of July. I can't image we'll be in this same house but that doesn't mean we can't start our own beach fires and watch from the beach. 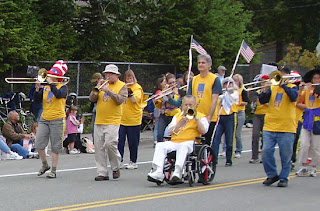 Again there were two parades - one in the morning in Juneau and one in the afternoon in Douglas. Pretty much the same entries...except for some reason the one in Douglas seems more laid back. I guess all the participants are tired so they don't rush through. There's more space between the entries, a lot more kids and equal amount of candy. I can't believe how much candy was thrown. Amazing! The local dentist assoc. should think about having an entry and throwing floss or tooth paste. They probably wouldn't be very popular though. 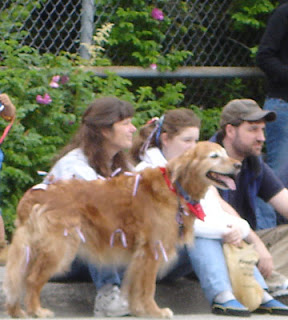 We're sorry that Ginny and Wrangler couldn't make it down for a visit - we found this patriot pal for Wrangler for next year.

There were a couple of entries that were very interesting. This is one group that was really energetic with drums, and dancing...not sure exactly which Filipino group they were representing but they were fun to watch and listen to. Their featured costumes were incredible. 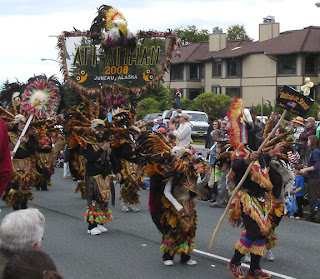 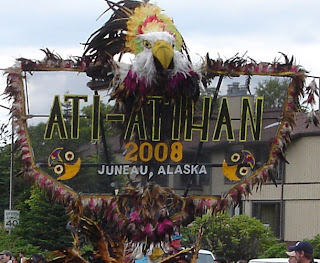 We rode our bikes over to watch the parade and after about an hour and 1/2 I wasn't the only one who was tired. 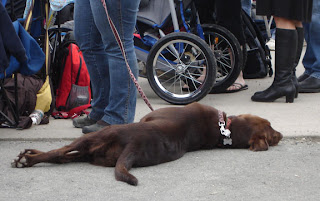 You're right!! It does get way dark there - it looked like some awesome fireworks. I missed out on your keylime pie - boy I'm really missing you now!

Wrangler and I sure did miss a cool show!! There's always next year. Hope to see you soon!