The USS Juneau, a navy transport ship, stopped off on its way from Tokyo to San Diego. Its going to be decommissioned when it hits its home port in San Diego and since we're celebrating the 50th anniversary of Statehood and Juneau is the ship's namesake, I guess a stop-over seemed like the right thing to do.

This is the third ship to be the USS Juneau - the second ship became famous in WW2 when it went down carrying 5 brothers - the Sullivan Brothers.

We watched her come up the channel on Sunday. I'm sure it was a coincidence but it seemed like all of a sudden all the boat and air traffic stopped while she maneuvered into place at the coast guard dock. 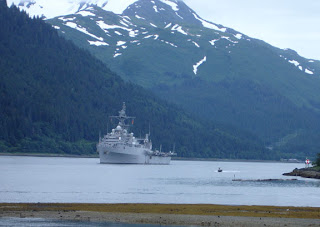 At one point to tug boats came along side to help her into place. You could see the sailor's getting ready to show themselves on the flight deck - making sure they were spaced an arm's length away from each other. And I saw several flashes going off as we watched them from the deck. I wonder if they saw Cappy? 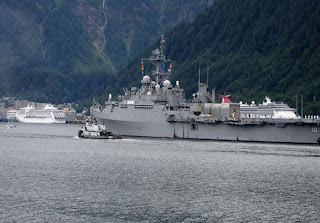 I stopped by for a tour today just to see what it was like. I a managed to get in with the group of 13 4-year olds so the tour was a little slow going. Actually I'm sure the best part of the tour was getting to stomp in the rain puddles that had pooled up on all the decks. Plus going up and down all the step ladders with the chain's on them PLUS pushing the swivel chairs in the galley to see which one had the loudest squeak – that was really fun.

Here's the boat deck and one of their painted murals. Their mascot is the alligator since its an amphibious ship. One quick-minded granny on the tour said, "well last time I looked an alligator is a reptile, not an amphibian. What are they teaching you in school these days?" 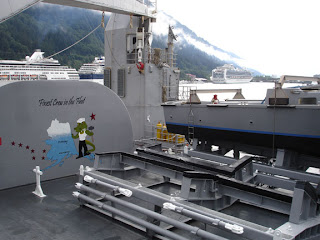 Here's our (guide boson's mate) with the granny's great-grandson. He wasn't with the 4-year olds - comm'on he's at least 5. 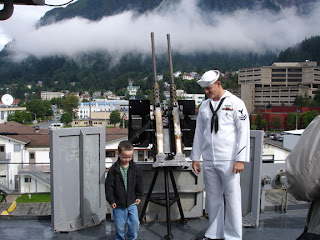 We got to go to the area they call the "steel beach" because they can lower their ballast and flood this area so they can load and unload as needed. I didn't realize it when I was standing on it but this is part of the hovercraft - its was as wide as they ship (and deflated). They were taking back a few personal items from Japan. The Toyota jeep looked to be in pretty rough shape. 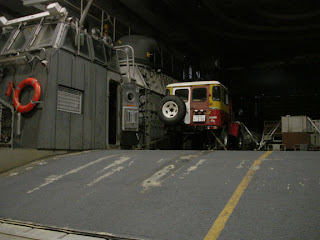 Here's another one of the misrepresented logos - Its painted on some sort of garage door - maybe that goes down to the transport area (or where they keep the ammo). 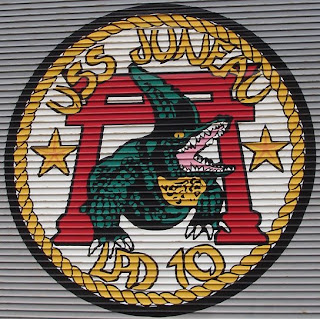 And finally, after a weekend of rain, we had out sights on some blue sky! 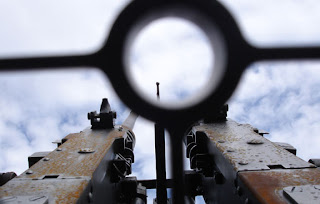