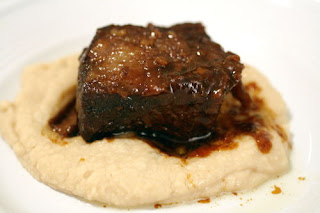 Photo taken from The Bitten Word

I had a london broil in the freezer that I've been wanting to use before it gets too freezer burnt and found this recipe using beer, beef, hoisin and ginger. I thought it might be pretty tasty and it was! I used Alaska Brew Company's Barley Wine to replace the ale and the london broil instead of the ribs, but everything else was pretty much as included on the recipe. We had two meals from it. the first time we had chucks of the meat with soba noodles and the second meal we shredded the meat up and had hoisin beef sandwiches on hoagie rolls. They were yummy!
Posted by Heidi Olson at 6:27 AM

I think we might try that! Thanks for the serving ideas.

It came from inspiration from something you posted on your blog!