Its been colder here then previous winters and I find that with all the hats I have my ears have been getting cold. I've found plenty of patterns for earflap hats but I thought one that was felted with be better to help cut the wind and be better in the wet snow/rain for southeast Alaska.

So I had this left over yarn from other projects and found a pattern in one of my books, called Felt It.

You start out knitting the two ear flaps separately and then you combine them with cast-on stitches until you have the basis of the hat. Then you work your way around and around until you start decreasing for the crown.

If I hadn't added the snowflake pattern it would have been a very quick knit but then it would also have been boring! 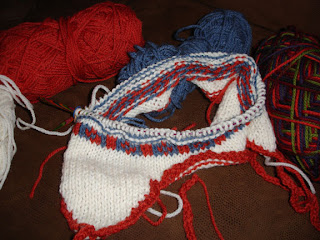 Here we are in the pre-felting stage. I'm a little concerned that the snowflake part where I carried the yarn might be a little too tight but we'll see how it felts up.

And here we are - already to go! We had a windy walk on the beach and my ears were warm! 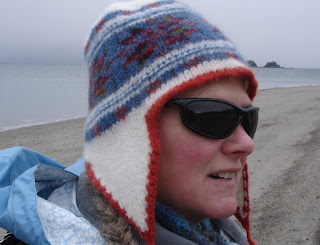 The middle part is a little tight but while it was still wet I wore it around to help stretch it out. I think if I make another one with a pattern in it I'll make the larger size.
Posted by Heidi Olson at 5:56 PM