Despite the rain, snow, and slain-slush we've had this last week, Terry invited us to go for a ski out at Dredge Lakes along the Mendenhall River. This is a great place for bird watching in the spring and riding bikes in the summer, and now skiing in the winter. I guess we can laugh about it now but the conditions weren't that great and I didn't think I would make it around the trail without hurting myself. We still haven't figured out how to wax for Juneau weather. Everyone else around here has waxless skis and that seems to be the best choice. Our skis aren't waxless and we never had any problems with waxing while in Fairbanks. After our attempts last winter I had purchased some softer wax in hopes of finding the right combination. It didn't work.

At first it was ok - it seemed we had kick and glide. But after a few 100 feet I noticed that the snow had started to clump up under my foot and started to collect. Soon I had no glide and had a lump of snow about 4 inches in the middle of my ski. And then I did a face plant–womp–flat on the ground. I thought about just staying there until the rest of our party could come back and get me but I slowly got up. That was the first of many falls as I became over confident my skis would glide along instead of collecting snow like a magnet. We went through some slush and that seemed to solve the problem until we got out of the slush back to the soft wet snow where it started all over again.

I know my sisters will remember going fishing with our dad and walking through the muck and clay. Our tennis shoes with their flat soles quickly became high heels that we wobbled around on, giggling all the way until one of us fell in the mud and then it wasn't so funny anymore (at least to the one in the mud).

We finally turned around when the slush became a pond and went over our boots. We knew it went over our boots because Tim sacrificed himself and went through it. He started off on top of the thin but then sunk into the cold, cold water. He has determined that his boots are NOT waterproof.

But we did have a nice view of the Mendenhall Glacier from the river side. And we made it back to the car without being twisted too far out of shape. And now the hunt is on for some waxless skis! 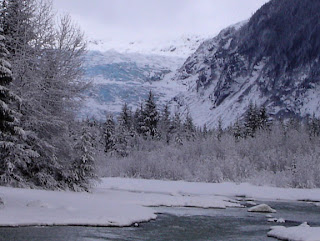 I can sooooo identify with this. When I used to ski a lot in California before the advent of waxless skis (yes there was such a time in my lifetime) we would go from the slush of the bright sunny meadow to the ice of the forested trails. There was no wax to handle slush-to-ice-to-slush-to... When I came up here and Tom got me xc skis, of course they were the wax kind (it's always so cold here you never need anything but...(whose ever heard of klister?) and they go so much faster and...)I said no no no but wax skis are what I have and every year I say I want waxless skis or you can do scraping and waxing! Shari