I had read in the paper that Ray Troll was painting a mural out at UAS and I know it was in the Eagan building but I wasn't sure where. I was surprised when I went to my class on Thursday night that he was creating the mural right outside my classroom door. He uses a projection screen and has had a couple of helpers creating the outlines. Its was pretty cool process to watch before class started. 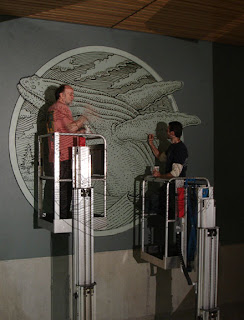 I'm sure that most of you in Alaska are familiar with his work - he does a lot of fish work and maybe most famous for his t-shirts and posters featuring the various salmon species. According to his website he's just done some outdoor murals for a NOAA facility in California. Pretty cool looking!
Posted by Heidi Olson at 6:52 PM