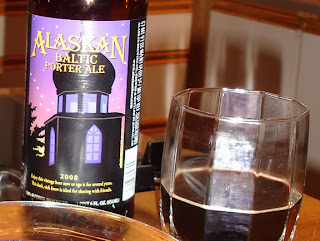 I stopped at Fred's the other day for a bottle of wine to go with dinner and saw this new (to me at least) Porter from Alaska Brew Company, its called a Baltic Porter Ale and comes in a 22 oz bottle. It has a hint of cherry and vanilla in a rich malted liquid. I liked it but not as much as I like the smoked porter or some other darker beers I've had.

But it was pretty tasty served with these Kale Chips. I'm never quite sure how to prepare kale. It seems like if you braise it or steam it it is stringy and tough. I can only eat so much of it raw and it usually comes in a large bundle. But everyone likes chips, right! They were fun to eat– the curly edges of the kale when crisped quickly dissolved in your mouth–much like eating pop rocks! 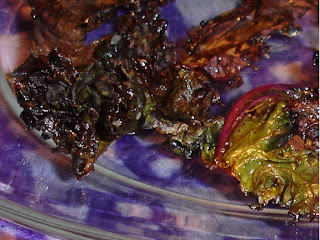 I only did about 5 medium-sized leaves with the above recipe. I might have made them a bit too salty for our taste. My kale pieces were a little bigger then a fiddy-cents piece and they baked quickly in about 8 minutes.

Fascinating! I will be trying these for sure, and probably all the variations, too!