We had a beautiful weekend down here. Its always pretty clear when the wind blows down from the North. I like to think that my family and friends from up north are sending their greetings to me, and sharing the clear skies that they often enjoy.

It also seems like the temperature seems to dip down (maybe by 10°) so its also a reminder of what I'm missing! Brrrr :)

We spend the weekend hiking. We're working our way through the 90 short trails of Juneau. We've been doing pretty good and have completed most of the longer ones. There are several listed in the book that are pretty short and/or tell you how to gain beach access. On Saturday we hit about 5 of these spots. Mostly for selfish reasons, but it gave up the opportunity to feel a sense of accomplishment when we got to tick off all five in one day! Whew, certainly deserved a beer after all that walking!

We've seen people out here fishing and thought it might be a good spot for dollys and trout but haven't made the first cast yet. The water originates in Peterson Creek. We'll have to come back next spring with our fly rods. The trail book says that when there is snow and the slough freezes over it makes for great skiing and you can actually sky over the another trail and end up at Boy Scout Beach.

At the mouth of the salt chuck, where the water flows into Eagle Harbor, you can see the below pictured rock outcropping at low tide. I was really surprised at how steep the waterfall was. We'll have to go back during a high tide to get a contrasting picture. Its called a reverse waterfall because at high tide the incoming water covers the rocks and the water flows the opposite direction. We know that salmon, dollys, and trout come through. At low tide this will make a good picnic spot! and if it had been about 50 degrees water there were several inviting pools that would be a good cooling off spot. 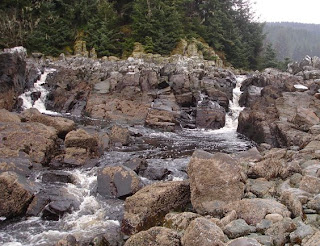 At this little point of land (I think its called Eagle Rock), Ernest Gruening's family built a large cabin and used it as a vacation home. The house isn't open to the public but it did look like someone was living there - at least part of the time. A short trail system takes you down to the falls. There's a great picture of Gruening and another guy going down the falls in a canoe. It looked like fun!

Auke Rec Area
It was a lovely evening and we had forgotten to eat our lunch so we stopped at Auke Rec to have a snack before heading home to make dinner. This is also where the video was taken. 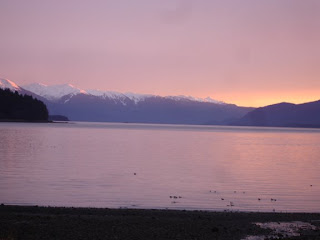