We've driven by this trailhead marker for the Lena Point Loop Trail, a dozen times so it was nice to get the chance to actually get out on it. The first part of the trail was made up of boardwalk and wound its way through the woods. You came to a fork where you could go down to the beach or continue to climb up to the point. We chose to climb. There were several spots along the way where you could access the beach. It was getting late in the day and the clouds were moving through so we had some really nice skies to watch. 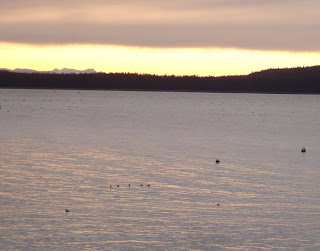 This is the site where the Princess Kathleen rammed into the coast in 1952. From what I've read everyone walked away and got into waiting cabs and local cars to be taken to town. Here's some pictures from the state archives. Last winter I attended a presentation given by a lady scuba diver. She said that about 15 years ago the ship was basically untouched and hadn't been pillaged yet. She had some photos that she took at it was quite amazing.