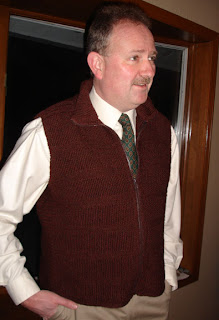 I've been working on a knitted vest for Tim which I had hoped to finish for his birthday at the end of October but didn't quite make it. The pattern is a mixture of moss stitch and a welt stitch with welt stitch under the arms between the fronts and the back. 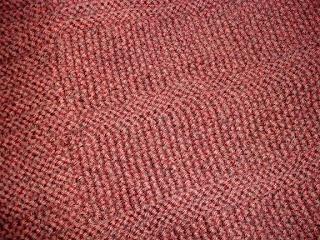 The pattern came from Knitting Classic Style: 35 Modern Designs Inspired by Fashion's Archives and I used 5 skeins of Knit Picks Swish Superwash in a Heather merlot – a little more red then the swatch card showed. I have about 1/3 of a skein leftover

I had problems finding the right length zipper in Juneau but finally found one online and ordered from http://www.zipperstop.com . It came quickly - I was very impressed with their service. If I had read the pattern directions about the zipper a little more closely I would have realized that they expected you to use a much longer zipper and then fold back the top of the zipper into the collar. Now it makes a lot more sense. I read through this tutorial after I had one side of the zipper already put in. I can see that it might have been helpful to have basted the right front and the left front together so that the stripes lined up. I think I did ok though without doing that. I also didn't want the edge of the knitting to be too close to the zipper edge and have the potential of getting caught. 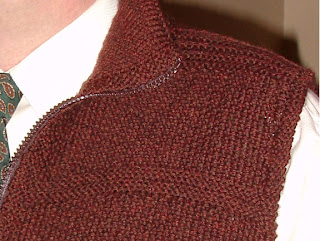 The finally product came out a wee bit shorter then I intended - I know I measured more than once but it ended up maybe an inch shorter. Tim says he thinks it just fine. Just don't ask to look at the inside - I had problems with the yarn splitting when I spliced them together - I've got some ugly knots.
Posted by Heidi Olson at 12:58 PM

I think the vest looks great and I like vests the length this one is. I also appreciate the zipper tutorial though I don't think I have ever gotten a zipper put in in 45 minutes! Looks like a good color for Thanksgiving and Christmas. Tim looks so up-town too!

It looks great! I am going to show it to Jim, too. Thanks also for the zipper tutorial.

I sewed the zipper in over two nights. I added a second edge binding along the inside so that it wouldn't roll or catch on anything. I don't know if it was necessary but it just seemed like the right thing do to. It also looks a little nicer on the inside that way.